Losing Reyes another blow in tough month for Mexico 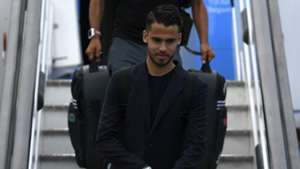 Hector Vivas Mexico World Cup Germany Germany v Mexico The 25-year-old’s versatility was highly prized by manager Juan Carlos Osorio, which makes his departure because of injury a big blow Mexico lost a second defender Tuesday with Diego Reyes ruled out of the World Cup.It’s not a huge shock. As the deadline for him to suit up went from June 2 to June 9 to – some point in the future – it was clear that the hamstring injury he had suffered with Porto at the beginning of May wasn’t healing as hoped . Knowing it was unlikely Reyes would be back on the field seems to have softened the blow, but this definitely is still a blow for El Tri. It’s been a rough month for Mexico between Reyes and center back Nestor Araujo having to pull out of the tournament with injuries, a send-off party ending up in the tabloids and a scoreless draw, a narrow win and a 2-0 defeat to Denmark doing little to boost the mood ahead of the tournament. Article continues below Editors’ Picks Out of his depth! Emery on borrowed time after another abysmal Arsenal display Diving, tactical fouls & the emerging war of words between Guardiola & Klopp Sorry, Cristiano! Pjanic is Juventus’ most important player right now Arsenal would be selling their soul with Mourinho move Reyes is a player who can do a bit of everything. While he hasn’t always excelled as a defensive midfielder, he may be Mexico’s best option there when healthy – or at least the best option in manager Juan Carlos Osorio’s player pool. He’s also one of the nation’s best center backs. That’s significant. After Araujo’s injury, the position isn’t deep. Hector Moreno is a top player with several seasons of European experience. Carlos Salcedo is in that category as well, but may be pressed into duty at right back. After that, the picture is less clear. Hugo Ayala is a fine Liga MX center back but may never transcend that level. And that’s it. Those are pretty much the options. Rafa Marquez also is in the squad but may not have the dexterity needed to play at the back.While Reyes isn’t a star like forward Javier “Chicharito” Hernandez or one of the key veteran leaders like midfielder Andres Guardado or Marquez, the versatility Reyes provides puts him at least in the top 10 most important Mexico players. That Osorio hung on for so long despite signs Reyes wouldn’t be ready to go, waiting until the team already was in Russia to give up hope of a full recovery shows how much the manager prizes his skills. Of course, it’s also a personal blow for Reyes, though at 25 you’d expect him to have another opportunity at a second World Cup.”I’ve decided to make a decision that hurts my soul because I think it’s the best for my teammates because I’m not sure I can achieve the best version of myself in such little time. That’s why I’ve decided, along with (manager) Juan Carlos Osorio that I won’t make up part of the 23 players who will fight for the World Cup,” he wrote in a statement. “There’s nothing left for me to do than wish Erick, my teammates and the coaching staff the best of luck and to thank them for the opportunity and the unconditional support during the last few days. I’m convinced they’ll make history because of their talent and because this united and committed group can do big things.”While Guti takes his roster spot, Edson Alvarez is the clear replacement for Reyes. The 20-year-old has a lot of similarities to Reyes. Both can play at center back or defensive midfield. Both came up in the Club America system. Alvarez played well at the Gold Cup at right back. Going from that tournament to starting there during the World Cup will be quite a jump.Osorio may not have a better option, though. Alvarez is a poor man’s Reyes, but Mexico will have to make the best of what it has without the Porto player, without Araujo and without the depth that can be so critical at tournaments like the World Cup.